In which one of the Thompson brothers gets handy with a gun, back in 1836.

One for the genealogists and historians today!  Knitters beware – the balaclava is coming on apace. And will be blogged very soon!

Some time back, I wrote about my American relatives in Illinois, being victims to an accomplished horse stealer, in 1853.

Back in 1836, the same thing was happening home in Yorkshire, to the Thompsons.

To set the scene, the story happened to John Thompson, born in Wistow, Yorkshire. He had two older brothers – William, and Charles.  William was my great grandad X 3. The Thompsons were an old farming family. My mother’s was the last generation of Thompsons to be born on a farm, after at least 600 years of solid farming tradition, according to parish records.

The newspapers never name ‘the brother’ so we can assume the gun-toting Thompson may have been either William or Charles. For the purpose of this story, I’d like to imagine it was my William – as Charles goes on to glory of a very different kind, anyway.

Back in 1836, Charles had a son – another William (we do that to annoy you!) – who would have been 20 when this happened. He was to emigrate to California in later life, and along with his son, and they developed the famous Thompsons’ Seedless grapes (sultanas to you and I!) Over 90% of the world’s grapes are, to this day, Thompson’s Seedless. Apparently.

I wish we got royalties.

Charles stayed home in Yorkshire, and we often wondered why he had a plush marble gravestone when parish records had him down as farm labourer. The mystery is now solved. The $$ must have been sent home from California.  Charles lived well into his nineties.

It’s a saying round here – and nearly 200 years on, I still live “round here” – that you know you’re a local if you have romani blood.  I do (but ony the other side of the family!) I just wanted to get that in first! Before I give you the story. Quite exciting to find your ancestors involved in this kind of thing:

ELIJAH YOUNG (36), and Wm. YOUNG (54), two brothers and gypsies, were charged with stealing a bay mare,  the property of John Thompson, farmer, of Wistow.

MR.ARMSTRONG, for the prosecution,  and SIR G.A. LEWIN, for the defence.

On the night of the 23rd of February,  between ten and eleven o’clock, prosecutor’s brother was alarmed by a noise in the fold-yard. He got up, and on going out, heard some person urging the mare to leap over a hedge. He followed them, and saw the prisoners,  one leading the mare, and the other, walking behind;  the brother informed his brother,  and took with him a gun.  When he got up to the men, he told them he would take them,  and seized William with one hand, and  held the gun in the other.  Elijah was coming back to assist his brother,  when prosecutor’s brother threatened to shoot him if he moved.  Prosecutor came up, and witness knocked one of them down,  and gave them into the charge of his brother,  whilst in that position, and then run after Elijah, with whom he had a severe struggle, but ultimately succeeded in capturing the two.  Witnesses were called as to the prisoners’ character.  Guilty – to be transported for life.

I went in search of Elijah and William, knowing the Australian records are often searchable from anywhere in the world.

The New South Wales state records have a searchable database of over 120,000 convict records.

Elijah Young sailed on the Moffat in 1836. There is a record of his Ticket of Leave in the Windsor district. We know it’s our Elijah as the record says he had been tried at York.

William also sailed on the Moffat and his records show Tickets of leave “on the recommendation of the Windsor Bench”, and a Certificate of Emancipation.

Which means both men survived the ordeal of the transport, and later, their time as convicts. By no means a foregone conclusion.

The Moffat was one of the faster ships; making the passage from Plymouth to Hobart in 101 days. It was a Bengal-built vessel, so built from teak and a whopping 830 tonnes. I managed to find some mentions of Moffat online, which gives a sense of what it must have been like for Elijah and William Young:

...In many respects, the Indian ships made ideal convict
transports. The Country traders were larger and roomier than the
contemporary British vessels, and they were staunchly built. After
years of arduous service, the Indian vessels, particularly those built of the finest teak, were still thoroughly seaworthy and capable of making good passages, and in these respects they compared more than favourably with British-built vessels. They simply refused to
be worn out, and many of them ultimately were scrapped merely because they had become out-moded. The older Indian vessels employed in this period were inferior in design to later British and Indian ships, but although gloomy and ill-ventilated below decks, the health of their
prisoners did not appreciably suffer in consequence. 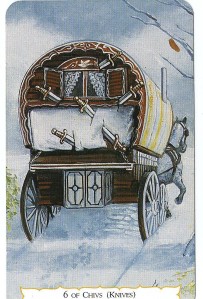 As the men were transported, Elijah’s wife gave birth to his baby, at Wistow Lordship. I have found no evidence of her joining him in Australia.

Life must have been incredibly hard for Elijah’s wife, left alone on Wistow Common with a baby and maybe older children. Like many of the romani in this area, she would have worked as a day labourer on the farms.

Lifers were as good as dead, legally, home in England. This did not leave their wives free to re-marry, but it seems to have left them free to re-marry at the other end of the world.  But the men had it lucky. In the very same gaol delivery, were two Cawood men (next village along), one of whom was sentenced to death for stealing two £5 notes.  The Thompsons’ bay mare was probably worth a comparable sum.

Several years on, Wistow hit the headlines again when my two great uncles were banged up for incendiarism. One got the death sentence and with just days to go, in the death cell at York Castle, got his sentence commuted to transportation. More of him another time!  But he also left a pregnant wife behind and the child grew up, never having set eyes on her father but still naming him, on her wedding certificate, twenty years later, as if he was just down the road!

Luckily for us, the Aussies are great at digitising newspapers and making them freely available online.

I didn’t find much trace of William, but found some intriguing mentions of Elijah.

According to The Sydney Morning Herald of 9th June, 1849, Elijah was granted a conditional  pardon on May 1st, 1849. This was conditional on him staying in Aus, and would be null and void if he returned to England. Before long he was back in trouble, though!

Digitised newspapers at Australia Trove tell us that in 1850, Elijah was implicated in the disappearance of a married woman, Rebecca Cox.  He had been at Rebecca’s house to pick up his sister in law’s belongings . A warrant was put out for his arrest. And we get a fascinating description of the vanished Elijah:

“..Elijah Young, formerly ascribed to Mr.Fitzgerald of Windsor, about five feet nine inches in height,  stout, very dark with black hair, once lived at or near Bathurst,; he is a gypsy, and speaks their language…”

The same paper for January 1851, posted this Wanted!  in its columns:

The Undersigned hereby offers the above Reward for the apprehension of ELIJAH YOUNG, a Gypsey,  of the following description,  Viz – height about five feet nine inches,  stout, very dark complexion,  black hair, formerly assigned to Mr Fitzgerald Windsor, and once lived at Bathurst..

York Reference Library also has a searchable database of York convicts. Both Elijah and William can be found there, with the date of their trial (27.2.1836).

You can see images from this deck here. It’s still OOP, so not easy to get hold of!

2 replies on “Three of Knives.”

My husband’s great grandfather convict Belcher Dicks (gypsy) was with William Cox (convict and probably a gypsy) at Melville, Maitland at the same time Elijah Young took off with Rebecca Cox. I think the gypsies had a network and were not as alone as we think they were in a new country. Rebecca was taken back to Melville by her husband after being found with Elijah at Carcoar NSW by police. By the way Rebecca and William are buried together in Sydney however I can’t find what happened to Elijah. Happy to help research in Australia for you.
Lorna Dicks

Thanks, Lorna… That is absolutely fascinating to know. My dream is to go to Aus one day and do some research firsthand! Not going to happen in this lifetime, but I’m kind of happy for the Youngs, that there was a network and community for him that end as well as this. Despite the story, I know my mother’s (farming) family had huge respect for the romanis who worked their farm every harvest and often parked up there when they weren’t harvesting. I met another local in the pub a few years back whose family had also farmed in a small way round here, and he said “They say you’re not a real Cawood person if you don’t have a bit of romani ancestry!” and I’d guess that was right!