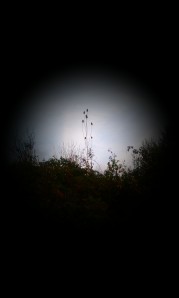 Teasles seen on a bit of wasteland, near Escrick, North Yorkshire, yesterday.

They were growing deep into a high ridge of brambles; too inaccessible for us to go and get a closer shot, but here are some teasles in the wild.

On Saturday, we were Luddites at Armley Mills, Leeds Industrial Museum, for the launch of Wool Week. We were in the weaver’s cottage, built in 1790. It was absolutely fantastic and we loved it so much, we hope to return very soon, to have a proper look round the site. And hopefully, drop off some copies of ‘The Old Hand-Knitters of the Dales’ in the museum shop. We spun on the Great Wheel, and had some fantastic conversations with members of the public – including one rather accomplished spinner who had a go for himself on the Great Wheel. People were especially taken by the repro Dales gloves we had on display and we had a lot of interest in ‘The Old Hand-Knitters of the Dales’ (which contains a pattern for the oldest extant dated Dales glove, the ‘G.Walker 1846’ glove kept by our old friends at the Wordsworth Trust, in Cumbria. All this made me think we should make a separate page here, for ‘The Old Hand-Knitters’. I will link to it, when it’s live.

We shared our weaver’s cottage space with an intriguing small Great Wheel; either one for someone seated, or possibly used for children in a spinning school, originally. And also a large, freestanding skein winder.

This week I have been mostly spinning yarn for Spinzilla.  I only decided to enter a couple of  days before the deadline, on impulse. And had to spend one of those days preparing rolags to spin at Armley and another day at the museum, so didn’t have time to spin many rolags for woollen English longdraw spinning. As a result, I ran out of rolags on the second day and spent yesterday worsted spinning, which is considerably slower.

Heard from the editor of a certain magazine that the photo shoot for said gansey went very well and it is looking good in the shots, and on the model. That was a relief as when you spend so long on one project, you’re too close to it to see it objectively and I wasn’t sure whether I’d pulled it off. There was less spinning in a gansey than I’d imagined, though. And when I recover, I will definitely spin another – the saving in £s alone justifies the work.

When it came to Spinzilla, either way I discovered I needed to card much more than just 1lb of fibre for a week long spinning session. Next year, I will enter Spinzilla after a week of carding! I haven’t figured out my entire yardage per day, yet but will break it down for yous next week. It would be fun to enter the challenge next time with the Great Wheel and a mountain of rolags. But this time I have been spinning on the Timbertops chair wheel.

I had some leftover rolags from Armley and did manage to hand-card 1lb of Lleyn.  The smallest of these 3 baskets contains logwood and cochineal dyed Boreray. That small basket is a large bike basket – the big green box full of Lleyn is MASSIVE! All spun in under two days though. Shows how relentless the carding must have been to supply one spinner.

I am off to spend some of my precious spinning time drum carding a bit more Lleyn. Then I will have to spin whatever I can find, semi-woollen (or semi-worsted, depending on how you look at it). Too slow to give me any chance of winning, but at least by the end of the week I should have some wool spun! Which is a good thing, as I came back from Masham Sheep Fair with three fleeces that unaccountably followed me home: a Manx Loghtan, a Whitefaced Woodland and a very beautiful grey Shetland… And I can’t start on them til I have cleared last year’s backlog of Lleyn and Boreray!