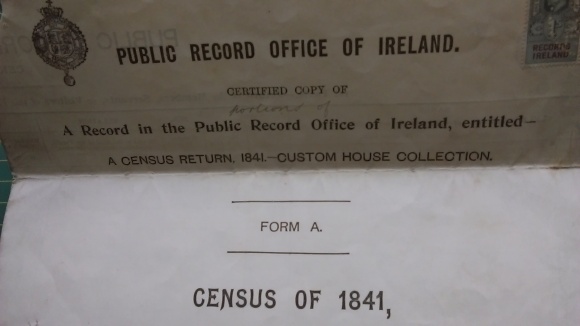 If you’re a descendant of the Lavelles/Lavells, of Ballyknock, County Mayo, do get in touch. I have something of your’s!

Occasionally, at the local car boot sale, I find some lost genealogical treasure and often think it would be cool to re-unite it with its rightful owners.

My parents’ generation threw away old certificates “because they look tatty”.  At a local archive, I was told there are no original inquest records for the whole of the York area, as they were thrown in a skip in the 1960s or 70s.  Fascinating, irreplaceable mill records used by Misses Hartley & Ingilby when researching ‘The Old Hand-Knitters of the Dales’ in the late 1940s, have now vanished without trace…

At the car boot sale, I found a lovely Victorian wooden box. Which I couldn’t afford. But inside it was this 1841 Census Return from the Public Record Office of Ireland and I had to have it, as the Lavelle (or ‘Lavell’ – it was spelled both ways on the form)  family, Michael and Mary, were a weaver and a spinner.  We got it, sans box, for a quid.  If this is your ancestor, it is your’s for the asking.

The Irish 1841 Census is a far more sophisticated and comprehensive thing than the British, that’s for sure.  The document is damaged so not all legible. It is about the size of 4 A4 sheets so hard for me to photo the entire thing.  Whereas the 1841 British Census just has a “Yes” or “No” tickbox for where born – whether in county or not –  the Irish census has the county (like subsequent British ones did) but better still, records the person’s Educational level (Mary and Mary were down as “cannot read” – which would be true of most weavers here, too, at this date) and what is interesting to us is that this is a concrete record of weaving and spinning as a true cottage industry, as late as 1841 – which it would remain in the remoter parts of the UK, as well. The average Yorkshire spinner would have been in a manufactory for two generations or so, by 1841.

I wonder why this lone record ended up carefully preserved in a little wooden box?  Did someone need it as proof of ID to emigrate, or work elsewhere?  Proof of age for a pension?  And how did it end up in York?  York had a sizeable Irish population down in the Bedern – near the Minster – by the 1840s.  I found out a little about this when I was researching the ill-fated Nine Days Wonder of Kelfield.  But this box may have been traded at an antiques fair/car boot anywhere, and we’ll never know how this one spinner and weaver’s family record ended up in a box one rainy morning at the Livestock Centre.   It would be cool to see it reunited with the family.  Hopefully, little Mary had descendants or a sibling who did… 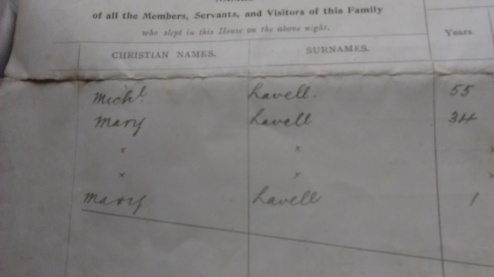 I have no knowledge of Irish genealogy but have gathered that census returns survive only erratically. So this may be a lucky find for someone.

If you’re a genealogist with these names in your tree, do get in touch.

One reply on “Spinner and Weaver of Ballyknock, County Mayo”

Wonderful! I hope this makes it to someone who is related!