‘Yarnmaker’ No 18 is just out, and with it a piece I did about Great Wheels .

On a Ravelry thread in the Yarnmaker Group this week, someone referred to this picture, (above) and asked what the elderly lady was doing. The answer is… that is a click  or clock reel. AKA “weasel”. This style of reel in fact seems to have been differentiated with the name “weasel”.
Mabel Ross defined a “click reel” as:

A reel which includes a mechanical means of indicating by an audible ‘click’ that a certain number of turns of the reel have been made. This facilitates the correct and speedy measurement of handspun yarn.

[Encyclopedia of Handspinning, Mabel Ross, Batsford, 1988]
(Incidentally, that woman looks to be spinning worsted from the fold. See the fibre on the wheel’s bed? Doesn’t look like rolags..?)
Here’s a picture we took of a 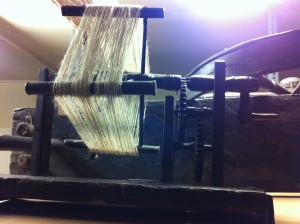 weasel in the bowels of Halifax’s Bankfield Museum.  Clever the way gears are used to speed up the process (I wonder if Mr Minor, inventor of the Minor’s Head that accelerated the Great Wheel, saw a weasel and got his idea?)
Clothiers and manufacturers expected hand-spinners to provide them yarn in predictable lengths – the industry standard for a hank of worsted being 560 yards. A weasel would speed up the process and provide uniform hanks.
In the 1780s, Catharine Cappe set up the York Spinning School for girls, a charity school. The wool spinning teacher she engaged was a woman from Halifax, who knew her stuff (quite literally). When this West Riding teacher left her, she had a hard time replacing her with a teacher as competent. The Wool Room Superintendent had to:
“…superintend the wool-spinning; to see that it reaches the proper counts; that every pound is marked with the girl’s name who spun it; that it is reeled right; that the Mistress keeps her spinning closet in order, and spinning book with accuracy, to correspond with the manufacturer; keep all the accounts; receive the money earned by spinning;.. and to see every pound of yarn weighed before it is returned to the manufacturer…”[From: “An Account of Two Charity Schools For the Education of Girls: And of A Female Friendly Society in York. Interspersed With reflections on Charity Schools and Friendly Societies in General”, Catharine Cappe, York,1800]
From this we can see that “reeling right” was a priority. In an household, the elderly and children would be pressed into service for jobs like wool carding and reeling.
I think it’s entirely possible that the cryptic nursery rhyme, that expounds the fleeting nature of money, how easy it is to spend – might be referring to the weasel being ‘popped’ into the pawn shop at the start of a week:
“Half a pound of tupenny rice,
Half a pound of treacle,
That’s the way the money goes,
Pop! goes the weasel!”

I will leave you with another image we took in the bowels of the Bankfield – you can also find it in Yarnmaker 18. These lovely leaves were carved on the underside of a Great Wheel bench (a wheel from Wales). No-one was ever intended to see them, or even know they were there, except for maybe the spinner. And even when this wheel was on display, years ago, it must have kept its Folk Art secret.

2 replies on “Pop Goes The Weasel”

I vaguely remember hearing that “the weasel” in question was the gent’s sunday best hat (suggested by the Opies?) Your thought could make sense in the woolspinning areas.
Gearing – been known about for centuries. I wouldn’t get fanciful about Minor’s heads being based on the click reel. If you want to step up/down angular speed, add some gearing.

I love things like the underside decoration – how touching…