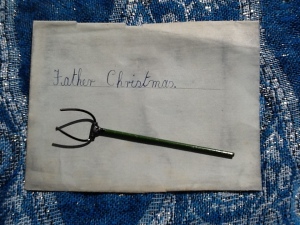 Genealogy, today.  And also, something in the spirit of the blog, where I like to talk about social and domestic history – especially women and children’s lives.

“Paracosm ~ a prolonged fantasy world invented by children; can have a definite geography and language and history…”

I have always been fascinated by paracosms. In their most developed forms, they’re imaginary worlds like the Brontes’ Angria and Gondal, or Hartley Coleridge’s Ejuxria.  For many children, though, they were maybe playing with toy soldiers, or dolls’ houses and that whole life of the imagination.

A while ago I stumbled on a homemade 1940s’ dolls’ house. It had been found dumped in the street, outside a charity shop. It came complete with 1940s’ wallpaper, textiles (hand-stitched silk curtains) and a full compliment of handmade 1940s’ dolls’ house furniture, with a few commercially available items like some of the Britain’s Miniature Garden items, thrown in.

Intriguingly, it came with a file of documentation. The file contained wartime letters from a little girl to her father (on active duty). Many letters concerned her dolls’ house and what she was making for it.  Over time, I will share with you, gentle Reader, little Brenda’s story and show you inside the dolls’ house and its items. And, when I’m done, the dolls’ house itself. Not pretty – but made with love.

The letters were carefully filed in date order and are a poignant look into the everyday world of a child in wartime.  The dolls’ house seems to have been emblematic of the bond she felt with her father.  On the outside of the house, Brenda  had written, in pencil, “Roedean”, which when I was told about the house, before I saw it, at first I assumed must be a reference to Brenda’s school. It turned out, it was the name of her beloved home, and the dolls’ house was her Roedean in miniature.

With no further ado, I will start the story.

I may blog other stuff inbetween, but over some time, will weave in and out of the other stuff, the lovely, touching story of Brenda Reynolds.  Most of her letters are addressed to her dad. But the first is to Father Christmas. The dated letters start in 1942. This could be that year, or earlier.  I traced Brenda and she is no longer alive. She was unmarried and had no direct descendants I could find. Maybe the dolls’ house and letters were found in an attic before they were left on the street?  Once I have shared this with you, I intend to re-home the dolls’ house with either a collector who will know how to preserve it – or a museum.  I think it deserves a wider audience first, though. 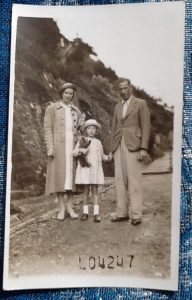 I managed to trace Brenda on Ancestry and FindMyPast.  FindMyPast has the 1939 Register – a snapshot of the UK on the brink of War, and I was able to use this to locate Brenda and her loved ones. The letters had her address on, which helped.

Someone slipped into the dolls’ house file, a few photos of the family of three. It seems Brenda was an only child.  In wartime, toys were scarce so there were probably more dad-made dolls’ houses than usual.  Until the War, Lines Brothers (trading as ‘Triang’) had probably been the best known dolls’ house makers, but the Triang factory went over to munitions, so as the dolls’ house was made after 1939,  it would be very typical of a wartime dolls’ house.

As I put up the letters, I will put up the items that Brenda mentions.  The first, (above)  is a Britain’s garden fork.  Pre-War these toys were made of lead.  During the War, they weren’t manufactured and returned in plastic, re-named Britain’s Floral Garden, in the 1960s.  It’ s quite startling to read of an item in the letters, then find it in the shoe-box where they currently reside. 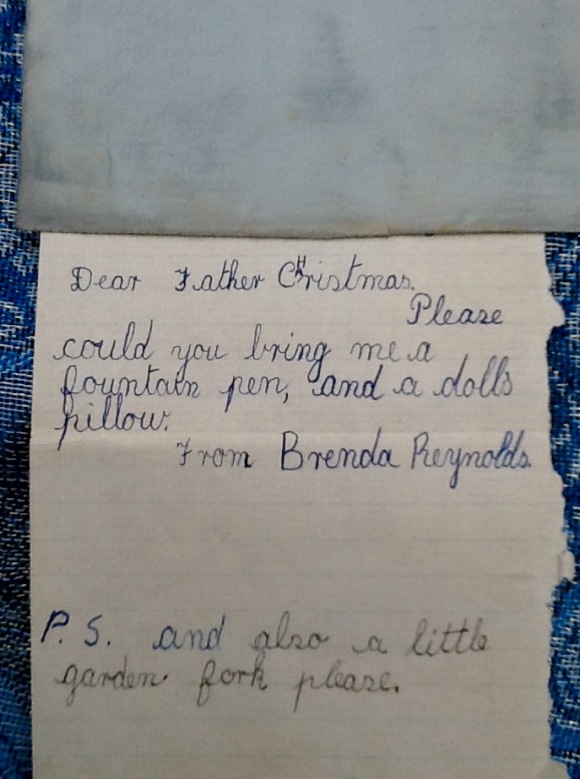 How sad that this lovely piece of history was left in the street and how wonderful that you rescued it.

Fabulous and poignant social history. How lucky you are to have come across such a treasure and thank you for sharing Brenda’s war-time story. How times change but the appeal of dolls’ houses continues unabated. Have you come across Roma Hopkinson’s dolls’ house which recaptures war-time life in it’s entirety?

I am just in the process of refurbishing my own dolls’ house for my granddaughter. my house, like Brenda’s was made for me by my father so I will enjoy reading this story.

What an amazing find! I look forward to the next post 🙂

Oh, I’m captivated. I love miniatures and dolls houses. They were a very important part of my childhood. We are currently in the thick of packing up our home of 24 years, and I just ran across all the dolls and dolls’ house furniture, complete with counterpanes hand woven by my mother.

What a wonderful treasure! I grew up in Berkshire from 1938 on, but I don’t remember having a doll’s house, although I still have a few pieces from my child’s tea set (most were broken or lost out in the garden!). I do remember visiting Queen Mary’s doll house in Windsor Castle. Looking forward to your next installment, Tabby.

I got my first dolls house for Christmas 1945, just before I was 4 years old, also handmade, so I am very much looking forward to following this story….

I’m glad you’ve seen this – tried to link you when I replied on here the other day, but it didn’t seem to post properly…

I love this! Looking forward to the next post about the doll’s house.

I am looking forward to finding out more! I am so glad you were able to rescue this house!

What a wonderful find.
I love the Father Christmas letter – from the times when we didn’t expect our parents to get into debt to buy us huge gifts every December!
Jenni

Fascinating! My mother was born in 1940 in Scotland. Her father was a dairy farmer so him and my Granny housed injured soldiers while they recuperated. This doll house thread is really close to home for me! Thank- you!